We are used to traditional Austrian food served in the villages of Tyrol. When a tourism officer in Achenkirch, a small municipality on the shores of Lake Achen (Achensee), recommended Martin’s Bistro we expected nothing less. We were looking for somewhere “peaceful with a view” to lunch while we waited for Mattheus’ first mountain bike race to start. And we were HUNGRY. But instead of long beer garden benches and würstel (sausages) or knödel (dumplings), this is what we found.

With a name like Martin’s Bistro, you don’t expect to find stylishly set tables in a beautiful tea garden setting. It reminds me of the tea gardens attached to nurseries in South Africa where people flock for brunch on Saturdays and Sundays.

The outside seating area at Martin’s Bistro is on a plant-filled wooden deck, with stairs leading to several fish ponds. The crystal-clear water comes from a stream that borders the property on one side. A variety of tree species growing next to the stream completes the picture in different shades of green.

By now it was clear that Martin’s Bistro isn’t your ordinary Austrian village restaurant. Not surprisingly, fish is the star ingredient on the menu, with schnitzel and steak making guest appearances.

Trout, salmon trout, char and arctic char feature in most of the main dishes. Coenraad had the grilled salmon trout fillet with white wine risotto (€16,50) while I opted for the tagliatelle with salmon trout in a ricotta-lemon sauce (€13,80). Mattheus wanted the small mixed salad (I promise there was no coercion from our side ?), which cost €4,50.

The combination of simple, fresh ingredients was spot on. Coenraad complimented his fish and rice with Mattheus’ left-over salad. He also sampled some of my pasta. By the time the waiter cleared the plates, there wasn’t a crumb left on one of them.

How fresh can you get?

The fish for some dishes on the menu are caught right there in front of your eyes. While we were waiting for our food, we watched as the waitress skilfully filleted a fish on the customer’s plate at the table next to ours.

If fish doesn’t appeal to you, there are also a few steaks and Wiener schnitzel from veal (the real deal) to choose from. Vegetarians or vegans are catered for with soups, salads and a few warm vegetable dishes. There was also a separate seasonal menu with nine asparagus dishes.

We didn’t have desert, but there were 4 options, including crêpes with fruit and ice-cream.

Martin’s Bistro isn’t the cheapest Austrian restaurant we’ve been to. Normally we stick to restaurants where main meals cost between €7 and €13. However, on this occasion we didn’t mind paying a little extra. The setting and the quality and taste of the dishes made it worthwhile. The price of our drinks (Coke, beer and wine) was in line with an average restaurant.

While we arrived spontaneously in informal outdoor attire, I would recommend Martin’s Bistro for special occasions such as birthdays or anniversaries. If you reserve a table, it is set fully with all the bells and whistles. The inside of the restaurant, where you would be seated in winter, has the same kind of “upmarket” feel as the outside setting. I know it’s far to drive if you don’t live at or near the Achensee, but I will definitely make the 40-minute trip from Innsbruck for a celebratory dinner.

The service wasn’t bad, but it wasn’t hearty either. It was almost as if the waitress forced herself to show professional kindness. Also, unless she was outside taking orders or delivering food, it was hard to get her attention. It became too hot for us in the sun at our first table. We wanted to move to an available table in the shade before she brought our food. After about 5 minutes without seeing her to ask, we simply moved ourselves. Her face clearly showed her displeasure when she discovered this. We were told in no uncertain terms that we would have to share the table (it was a 6-seater) with other guests if need be. It was fine with us, although it wasn’t necessary. However, it did put a damper on an otherwise excellent dining experience. 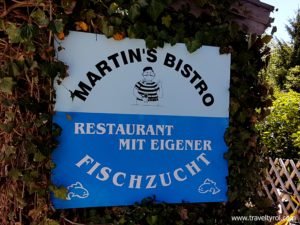 Opening Days and Times: Fridays to Tuesdays from 11:30 to 20:45. Visit their website for the most up to date information.

A Kiwi with Many Footprints in Tyrol

Eight countries bordering Austria = eight half marathons. I would never have made this equation, but Karin Robertson did. In fact, she went a step further and decided to complete said number of half marathons […]

Hard Rock Cafe Innsbruck is open! Not far from the city’s famous Golden Roof, it’s another shining attraction in the pedestrian zone in Maria Theresa Street. For the first time, Hard Rock incorporated the unique historical […]

In a city and country where local food like Schnitzel and dumplings take precedence over international cuisine, Soulkitchen in Innsbruck turns every expectation of an Austrian restaurant on its head. Situated on the outskirts of […]