Hard Rock Cafe Innsbruck is open! Not far from the city’s famous Golden Roof, it’s another shining attraction in the pedestrian zone in Maria Theresa Street. For the first time, Hard Rock incorporated the unique historical elements of the location into its own special brand. The result is a venue that locals and tourists alike will keep on coming back to.

Our first taste of Hard Rock Cafe Innsbruck was on a rainy Saturday not even a week after its official opening on 13 August. We – two South African families now living in Austria and the Netherlands respectively – arrived at around 18:00 in the hope that we were early enough to get a table. (They don’t take reservations.)

It was nice to be approached immediately, asked how many people we were, and explained to that we would have to wait 20 minutes for a table. No problem with a buzzer to let us know when the table is ready and a shop full of souvenirs and memorabilia to explore in the meantime!

Expect a little sensory overload when you first enter Hard Rock Cafe Innsbruck. (Or maybe we are just country bumpkins not used to hanging out in the city?) “Confronted” by an army of waiters, loud rock music, new menus and a lot of interesting music history to look at, we needed time to take it all in over a drink before ordering food. The kids were kept busy with a “Rockin’ Activity Book” and crayons while their parents reminisced about their good old party days.

We ordered a big plate of nachos to share as a starter. It was polished within minutes. The only let-down was that they were out of guacamole. For mains, we decided to stick to the famous Hard Rock Burgers – two original legendary burgers, one hickory barbeque bacon cheeseburger and one atomic burger. They all come at the same price of €14,90. The taste was great, although the patty was a bit on the dry side. The chips are the best I’ve had in a while.

The kids’ admiration for Hard Rock Cafe Innsbruck grew another notch when their meals were served in guitar shaped plates. Two had Buddy Jr’s Bangin burger with cheese and the other the Sir Kingston’s classic cheese pizza. The pizza was a bit of a disappointment for the young lad. It had a normal white bread base and a very sweet tomato relish. The kids’ meals with one drink (from the kids’ menu) cost €8,70.

While the relish was too sweet, the iced tea contained no sugar at all. “Mommy, it’s plain cold fruit tea,” M exclaimed after taking his first sip. Warm fruit tea with sugar or honey is one of his favourite winter drinks. I’m not saying it’s a bad thing that the Hard Rock version had no sugar! By then they each had a coke as well ?. They drank the tea regardless. The lack of sugar was forgiven when Pato, the friendly waiter trainer, said they may keep the plastic glasses the drinks came in. He also brought them a cocktail stirrer each.

By now you have probably gathered we were quite impressed with the service. There were about 20 trainers on the floor to make sure the local waiters live up to Hard Rock standards. We were even more impressed when Pato told us his “boss” was South African. Tanya Hugo, director of franchise operations for Europe, spent six weeks in Innsbruck to oversee the seamless opening of the latest Hard Rock Cafe. She took time out of her hectic evening schedule to check on her fellow South Africans twice. Thanks, Tanya!

The only little irritation during the meal was that we were asked to pay just as our food arrived because our waiter was going off shift. We don’t think shift changes should impact on the customers. 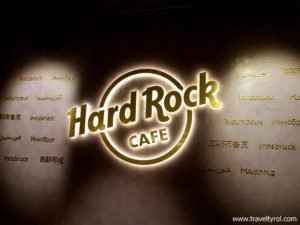 Hard Rock Café Innsbruck is a refreshing and welcome addition to the restaurant scene in the Capital of the Alps. With a little effort to perfect the dishes on the menu and if they manage to keep the high service levels up, there is no reason why it shouldn’t be a thundering success.

The Memorabilia from famous musicians include:

A Sonor set used by longtime Motörhead drummer Mikkey Dee on stage with the late Lemmy Kilmister during the group’s 2011 ‘The Wörld is Yours’ tour.

A puffy layered Stefanie Barnz jacket worn by pop megastar Lady Gaga on stage at the South by Southwest festival in Austin, Texas on March 14th, 2014.

The shoes worn by Michael Jackson during the photo sessions for his ‘Bad’ album cover in 1987. 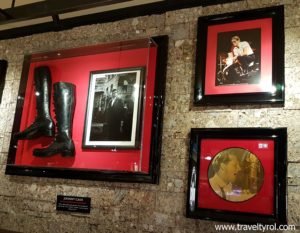 Address: Maria Theresa Street 16, Innsbruck. If you are coming by car, the closest parking is in the Rathaus Galerien.

Have you been to Hard Rock Cafe Innsbruck or any other Hard Rock Café in the world? Tell us all about it in the comments.

In a city and country where local food like Schnitzel and dumplings take precedence over international cuisine, Soulkitchen in Innsbruck turns every expectation of an Austrian restaurant on its head. Situated on the outskirts of […]

Be dazzled by Swarovski Crystal Worlds

To find the Swarovski Crystal Worlds (Kristallwelten) at our front door was one of the biggest surprises when we arrived in Tyrol seven years ago. I never knew Swarovski crystals came from Austria, never mind […]

The Best Innsbruck Christmas Markets To Visit This Year

The Innsbruck Christmas markets liven up the city’s old town from mid-November every year. This guide gives you all the details to plan your visit. […]

What I love about Hard Rock cafes is that they inculcate local flavour while maintaining their style and music choices. I have been to the one in Bangalore many times and the one in Bangkok. Need to get to this one fast!

No guacamole? 🙁 That’s a shame! I love avocados so much! I agree it’s strange as well about the shift change – seems kinda odd to ask to pay like that. Definitely hasn’t happened to me before! It’s nice though that they’ve incorporated the historical elements of the area into the venue. Keeps it local!

Jas from My Suitcase Journeys

Their legendary burgers are the bomb! Sucks that they didn’t have guac tho ughh. And mmmmmm nachos… I’m totally drooling in front of my laptop at the moment. Really gotta give it to Hard Rock cafe for combining food with music. Every time I visit one, I always get so intrigued by their wall displays!

We’ve been to Hard Rock cafes around the world, but not to any recently. There’s none where we live in Auckland. Pity about the lack of guacamole.

For the love of guacamole. Haha. I’ve been to a Hard Rock Cafe once, it wasn’t an interesting evening with the meal and decor. You have a beautiful heart, I might have been mad and get the evening ruined if I was asked to pay up the food got to me. Not as if it’s a policy but because it’s shift time. That doesn’t sound nice. Nevertheless, I’m glad you and the kids enjoyed your stay there.

I always went to the Hard Rock Cafe when I was younger to buy a T-shirt as a souvenir. Since then I have not been back. But I guess it is actually worth it for the food and the cheap beers !
Thank you and Greetings
Amelie

We’re usually regulars of Hard Rock Cafe around the world. We frequented the one in Venice when we lived there because it was only place to get an American taste of home and a good burger.

FYI, American-style ice tea never comes sweetened with sugar. You simply stir your own packet of sugar in if you want it sweetened, just as you would with hot tea.

I love going to Hardrock clubs in different parts of the world just to see how they include the local nuisances in their global brand. It is so cool your kids had meals served in guitar shaped plates.

Thanks for the heads up on the opening of Hard Rock Cafe Innsbruck – good to know that they don’t take reservations – but definitely worth the wait time, looks like they’re right on brand with incredible food and generous portions per plate. So cool that the kids meals were served in guitar shaped plates! Sounds like an overall great dining experience – will make sure we visit 🙂

We have been planning to visit the charming city Innsbruck for some time, now the Hard Rock Cafe is definitely going to be an addition to our list of things to experience. Love the way the place seamlessly integrates with the local culture and ethos. I can see all of you had a rocking time.